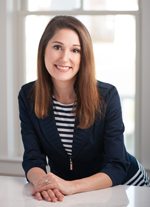 During her time as an Assistant District Attorney, Sarah handled a number of criminal cases, but her favorites involved juveniles and domestic violence cases—which is part of the reason her career search ultimately led her to us. Sarah enjoys the challenge of the courtroom particularly, and, while she worked as an Assistant District Attorney, really honed her skills.

Sarah is an experienced and passionate oral advocate. After working with victims of domestic violence, Sarah has a deep understanding for the issues that come up in these types of cases. She particularly enjoys custody cases, and her experience gives her a unique perspective that is both valuable and necessary to her practice. She’s compassionate, kind, and approachable, and she is an effective and judicious advocate on behalf of the women she represents.

Originally from Indiana, Sarah is one of four kids and has a brother and twin sisters. During college, Sarah was a member of the Purduettes, a singing and dancing musical group, and also spent a summer living in Argentina. In law school, she met her husband, Ben, who is an attorney practicing in the Navy JAG Corps, and relocated from Pennsylvania to Norfolk, Virginia to be with him.

Sarah is a foodie who loves to cook (though her favorite food is broccoli, so that’s weird), but is also equally content to eat her body weight in sugary candy. She loves to read (particularly the Harry Potter series, Ella Enchanted, and A Painted House by John Grisham), watch movies (her favorite is The Shawshank Redemption) and TV (especially Friends and Game of Thrones). Her lifetime goal is to go swimming with great white sharks. Sarah and her husband, Ben, live in Downtown Norfolk with their puppy, Zoe, a Chi-Poo (a Chihuahua/Poodle mix), who, according to Sarah, is perfect.